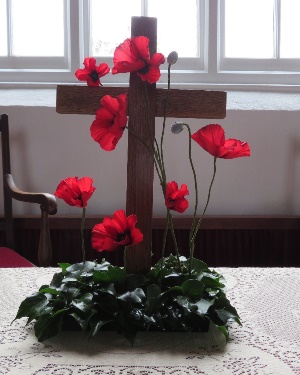 Though for the Week 8th November – Remembrance Day

These words from Isaiah tell people of his day and also people of today how we should live a life of peace and a life of striving for peace. Remembrance Day is a day when we remember so many who died in wars, millions of them. We mourn their passing, we remember the goodness and wisdom, the life and the laughter, the potential and the passion that died with them.

But Remembrance Day is more than that. It is the day when as Christians we should all dedicate ourselves anew to build a world of peace and for this we should look at the Prince of Peace, Jesus and it is with his help we can do this.

We all have a story to tell, I was reading about Martin of Tours, his father was a Roman army officer and he was trained to be a soldier. When Martin was a boy in Italy he had been caught in a thunder storm and he had sought shelter in the nearest building, which was a church where a service was in progress. He listened to the stories of Jesus and was captivated. He accepted a new kind of training to be a soldier of Christ, but before his learning about Jesus Christ was complete and before he was baptised, his father presented Martin to the Emperor. He was only 15 years old when he was sent to Amiens in France to begin his military service. On his arrival he met a beggar and moved by compassion, Martin took his own fine cloak, cut it in half and gave half to the beggar. In a dream he was commended by Jesus. He sought baptism and after another two years went to the emperor and asked to be released from military service to live a different life. It was difficult and unpopular but it was granted.

Martin, released from the army, had to walk home, it took him weeks. His mother joyfully met him and she became a Christian but his father turned him out! Now Martin walked back to France where he offered to help the Bishop of Poitiers who ordained him a deacon.

Martin wanted to live in solitude so after a short time he went to the quiet village of Ligugé and built himself a little cell (the first in Europe). He was not alone for long he would rise from prayer to respond to those in need. One day he attended a leper, another day he prayed for hours over a man who had hanged himself and whose life was returned to him and he was cured. God’s power was mightily at work in him, so it was not surprising when the Bishop of Tours died, Martin became their next Bishop.

As Bishop he made evangelistic visits to Pagan villages. One pagan priest challenged him to be bound to a tree as it was felled, to test whether his God would save him. The tree turned away from him, he was saved.

Martin used his privilege of being a guest at the Emperors table to ask for the release of innocent prisoners in Tours before he ate anything. The Emperor deeply respected Martin’s Christian example.

Martin did not live in a comfortable palace, he lived like a monk. He inspired many young men to live like this and they built a large monastic community where they lived in individual cells cut from the rock, in large gardens, fields, stables and chapels. They only spoke when necessary. This was the story of Marin of Tours, he achieved much.

What is my story? I was born in Scotland and brought up to despise my father – I learned different later. I was confirmed into the Episcopal Church and finally went to Glasgow University and graduated with BSc. I found then that the only work for me in Scotland (as a woman) was teaching. But I was offered a graduate apprenticeship from a visiting group from the Marconi College in Chelmsford.

But what is my Christian story? At Glasgow University there was a Christian Union, it had strengthened my faith and I now realised that Christ would be with me. So I moved to Essex and attended Marconi College where I met my husband and we got married in 1959. He became a Christian when he saw how much it meant to me.

I attended Chelmsford Cathedral first. After Marrying we lived in Springfield so we attended Springfield church where I became a reader and an Industrial chaplain.

Martin of Tours was a soldier of War who became a soldier for Christ, I’ve mentioned that I was bought up to despise my father but my life in Christ taught me differently.

Thank you Lord, may these thoughts turn any thoughts of war and conflict in others, to thoughts of love and compassion.

On this Remembrance Sunday

Forgive us for any feelings of

Hatred or Ill will we may feel to others.

Help us to see all people through your eyes

And to love them as you do.

We thank you for the sacrifice of those

Who have fought for the freedom of others

For those who have given the ultimate sacrifice

Thank you especially for the sacrifice of

Jesus on the cross.

Turn the hearts of warmongers

Into hearts of peacemakers

Give wisdom to the leaders of nations

And help each one of us to

Play our part in bringing peace to our world.

In Jesus name we ask it. Amen.