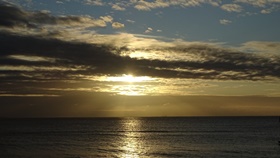 Thought of the Month November 2022

Cast your mind back to early August. The Queen was still alive and Boris was still Prime Minister. So recent, but it seems an age ago, doesn’t it?  Newspaper headlines then were dominated by the Archie Battersbee case. It was also the time of the Lambeth Conference, with Justin Welby grappling to keep incompatible wings of the Christian Church somehow together. The Supreme Court in America had just overturned the legal right to abortion. And Jean-Luc Godard decided to seek assistance to end his own life. How could I not write about these things?

I did. Excuse the fact that this is belated. It still says things that I believe are universally relevant; they matter to me, and I hope they strike a chord with you too.

Archie, of course, was the 12 year old boy over whom there had been a legal battle between his parents and hospital authorities as to whether, in a state where he was “probably brain-dead” with all bodily functions artificially maintained, these life-support mechanisms should be withdrawn. The “quality” press gave full coverage at every stage of the legal process to the arguments of each side and to the reasons given by every court where the case was considered behind the judgment given. There were certainly strong points on both sides of the argument, weaknesses as well, so that it was not possible to say that either conclusively proved its case over the other. Given a choice between prioritising the rights (and duties) of parents or those of society, the judges at every point gave precedence to what they called the “interests” of Archie. And they concluded, controversially, that those “interests” did not necessarily involve keeping him alive. The case was allowed to go to the highest courts in the land and was referred to international bodies as well, because it came to a moral, indeed one could say religious, conclusion about the nature of life as we understand it given our current scientific knowledge and capabilities. This conclusion could be summed up by saying that we do not have an automatic right to life at any cost. But we can be said to have a right to die with whatever dignity is possible. This has obvious ramifications for the ongoing debate over abortion in the US, and over assisted dying here and in Europe.

Jesus’s ministry is full of examples where he too had to arbitrate between two conflicting imperatives. Should, for example, Jews obey the civil law, or should they refuse to support an occupying pagan power through their taxes? Should Jews in all circumstances and on all occasions obey all the hundreds of regulations covering every aspect of life laid down in the Hebrew Bible?  Fortunately, like the Supreme Court in the case of Archie, he made his reasoning crystal clear:

The second is this: “Love your neighbour as yourself.”

There is no other commandment greater than these.

On these two commandments hang all the law and the prophets.

This essentially means that one’s duty of love to God and to one’s neighbour always takes precedence over any other conflicting subsidiary duties or laws or rules. Observing Jewish dietary laws or rules about the Sabbath might spring from desire to serve God, but it is not a substitute for such service and it is not in itself all that God expects of his servants: it can all too easily become an end in itself and more about oneself than about one’s Creator.

In practice, Christians take Old Testament laws with a pillar of salt and a large bag of pork scratchings. If we don’t eat prawns or ham, if we don’t go to the shops on Sunday, it’s probably for reasons other than that the Hebrew Bible tells us not to. Yet there is one issue where people still go trawling the OT for any evidence that might support their case. In the week that this ‘Thought’ was written, Archbishop Justin Welby reaffirmed the Church’s opposition to same-sex marriage. To be fair, his position is impossible, untenable. He cannot reconcile the blessing of gay marriage and the appointment of gay clergy, as happens in America, with the total antipathy to these practices in some other churches, principally those in Africa. You, reading this “Thought”, will, I imagine, have your own views on the subject. If you are opposed to same-sex marriage you will find verses in the Old Testament that condemn gay sex as an “abomination” (straight after the bit Jehovah’s Witnesses quote to refuse blood transfusions  and instructions to Aaron on how to sacrifice goats). My own belief is that when two people are in love, and wish to demonstrate that love in a commitment to a lifelong loving partnership, then marriage offers the opportunity to experience that love is the fulfilling of the law, and deserves, even demands, the blessing of the Church. Christ’s loving commandment thus takes moral precedence over rules formulated for and in centuries ago, that in most other respects are utterly redundant.

I cannot prove this. But I do ask you, if you do not agree with me, to ask yourself this November the question that the judges asked themselves over and again in the case of Archie Battersbee: where do the best “interests” of those directly affected in this matter actually lie?