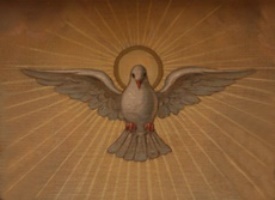 Did you watch the State Opening of Parliament this year? In spite of restrictions, it remained a day of splendour, ritual and mystique. It was easy to see what the Queen’s rôle was – the figure of authority, telling it like it is. Similarly Charles – he supported the Queen, literally and metaphorically; as her son, he shares her royal nature, sitting enthroned at her side, and in some ways is already taking over from her. But there was a third figure at the front, who came in separately, did nothing obvious or special, wasn’t even spotted very much by the cameras; an ephemeral, almost shadowy figure.

I thought of the Holy Trinity. God, Son, and Camilla.

I have always had problems with the Holy Spirit. The first problem is the name. When I was a child, it was generally the Holy Ghost. So when I pictured the Trinity, God was the old man with the beard, Jesus was the stained glass window at our local church, and the third figure was similar to Casper, the friendly ghost. I knew he was friendly because as someone hopeless at art, him at least I could draw. Ectoplasm isn’t hard. His name was Whit, and thanks to him, we had a Bank Holiday.

The second problem was much more serious. The Christian groups I came into contact with as a teenager were always going on about the need to be born again and baptised anew into the Holy Spirit. It turned out that all the non-rebaptised Christians I had been singing with in our church choir were second-class citizens. We might possibly get into Heaven, but not the mansions – only the council estate. And then I played for a healing service taken by a notorious local evangelical. The service was continually interrupted by someone speaking (or rather shouting) in tongues; the “healing” manifested itself in a long line of people falling backwards like dominoes and being moved out of the way by a hefty bunch of spiritual East End bouncers. It filled me with disquiet.

When I do these thoughts for the week, I hear voices. I hear the voice of Danny, talking about the need to tackle subjects that we find challenging, not just the easy and obvious ones. I hear the voice of Julie, full of sincerity and honesty and faith. And usually a few days after I have sent it off, I hear the voice of Steve with tactfully constructive suggestions (he told me to say!). I decided to heed these voices in trying to answer my own questions about the Holy Spirit. I have to say that there is no subject in our religion that so demands that we go back to the Bible to see what it has to say on the matter, and no subject that is so confusing and contradictory in what we find there. So I am going back to first principles. If the Holy Spirit proceeds from God, an expression of God’s nature and his actuality and his presence, then it is something that as Christians we all should experience, can experience, do experience; and that experience is transformational, is extraordinary; and it is a beginning, not an end.

The Spirit of God actually makes its first appearance in the second verse of the Bible, an expression of God as Creator, bringing form and order and meaning to the world. Another key mention is in the famous passage of Ezekiel about the valley of dry bones, into which God breathes his Spirit and gives life. So, proceeding from first principles, I would say that is my own experience of the meaning of the Spirit, and I’m guessing yours as well. During lockdown, I have been following the first year of life of Christine, my partner’s, grandson via Instagram and it has been little short of miraculous to see how his every act, his every expression, everything he does and sees and reacts to, is nurturing and fanning that spark of life within him, that humanity. At the other end of the spectrum, to see someone who has died is to know that in death that spark of life has gone – it is no longer there, the person that was is not that body, the chrysalis is dried up and empty, the butterfly has flown. So I feel certain that the life I have and the life you have is the gift of the Spirit. And that has another important consequence. I was watching the BBC programme Hospital this week. We are so used to quiz shows and Line of Duty that you look at the various patients and wonder firstly who will survive, and then who ought to survive. And then you follow the doctors and nurses and patients and their lovers and families, and to do so is to know that they all want all the patients to survive. They are all human beings who are loved and all have worth and all have that spark that you do not want to be quenched. So in a very real sense, we all bear witness to the fact that life is not just given by the Spirit, but is sanctified by the Spirit as well. The sixth Commandment does not establish the idea of the sanctity of human life but is a reflection of that value. What God decrees and what we feel in the depths of our being are one and the same, united in and through his Spirit.

I try to restrict “thoughts” to 1000 words, so it comes as a shock to realise I have used up my allocation without getting as far as the New Testament! Steve has kindly given me the go-ahead to do the concluding part next week.

A final note: if the Spirit gives life and sanctifies that life, it does so not only to Christians but also to Muslims and Jews, to all people. Think on that, Benjamin Netanyahu. Think on that, Hamas.

As we reflect on Pentecost

Help us to be open

To your spirit working in our lives.

Give us the wisdom and strength

To heed your prompting

Through Jesus Christ our Lord.