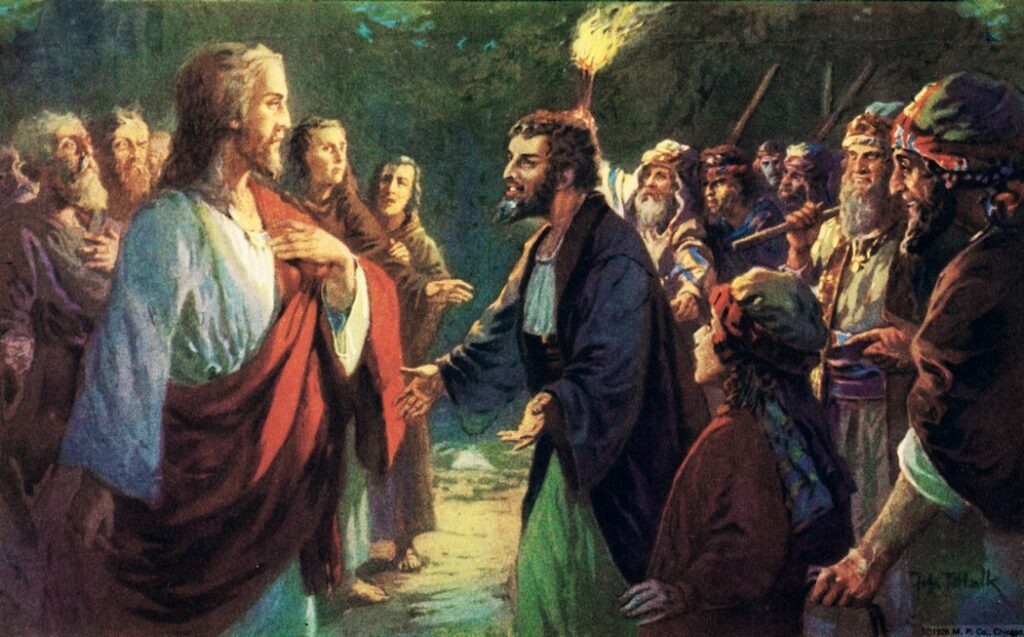 In the morning, the whole assembly brought Jesus to the Roman governor Pontius Pilate under charges of subverting the nation, opposing taxes to Caesar, and making himself a king. Pilate authorized the Jewish leaders to judge Jesus according to their own law and execute sentencing; however, the Jewish leaders replied that they were not allowed by the Romans to carry out a sentence of death. 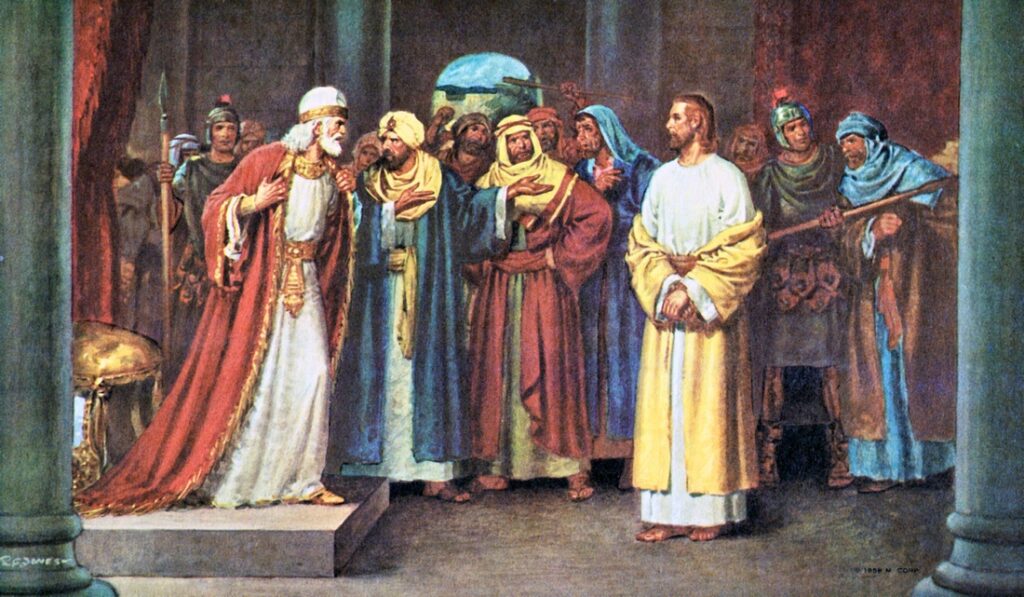 Pilate questioned Jesus and told the assembly that there was no basis for sentencing. Upon learning that Jesus was from Galilee, Pilate referred the case to the ruler of Galilee, King Herod, who was in Jerusalem for the Passover Feast. Herod questioned Jesus but received no answer; Herod sent Jesus back to Pilate. Pilate told the assembly that neither he nor Herod found Jesus to be guilty; Pilate resolved to have Jesus whipped and released. Under the guidance of the chief priests, the crowd asked for Barabbas, who had been imprisoned for committing murder during an insurrection. Pilate asked what they would have him do with Jesus, and they demanded, “Crucify him” Pilate’s wife had seen Jesus in a dream earlier that day, and she forewarned Pilate to “have nothing to do with this righteous man”. Pilate had Jesus flogged and then brought him out to the crowd to release him. The chief priests informed Pilate of a new charge, demanding Jesus be sentenced to death “because he claimed to be God’s son.” This possibility filled Pilate with fear, and he brought Jesus back inside the palace and demanded to know from where he came. 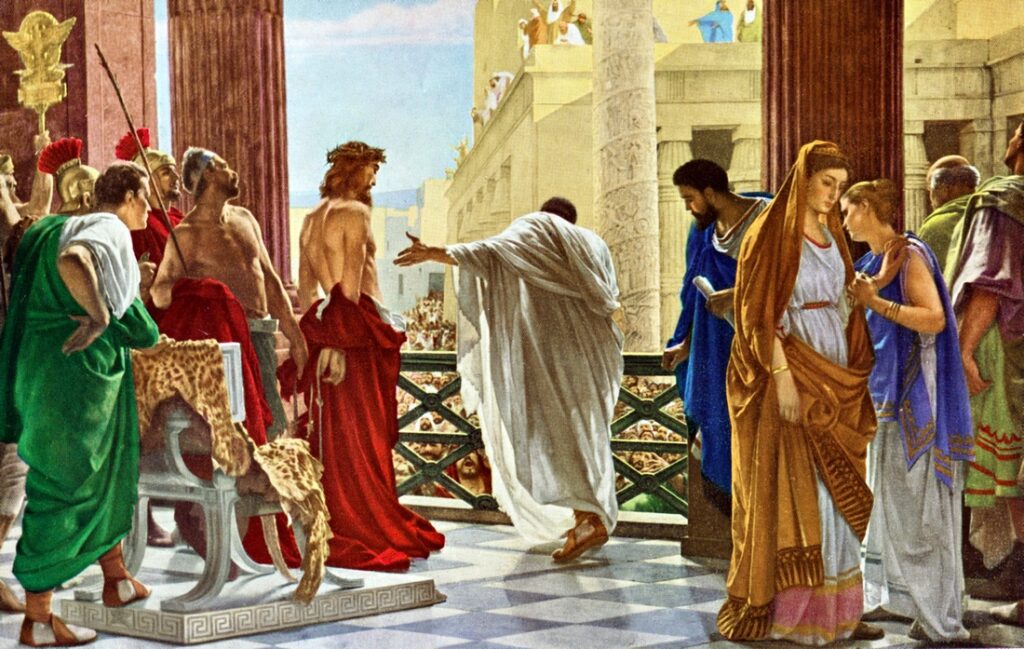 Coming before the crowd one last time, Pilate declared Jesus innocent and washed his own hands in water to show he had no part in this condemnation. Nevertheless, Pilate handed Jesus over to be crucified in order to forestall a riot. and ultimately to keep his job. The sentence written was “Jesus of Nazareth, King of the Jews.” Jesus carried his cross to the site of execution (assisted by Simon of Cyrene), called the “place of the Skull”, or “Golgotha” in Hebrew and in Latin “Calvary”. There he was crucified along with two criminals. 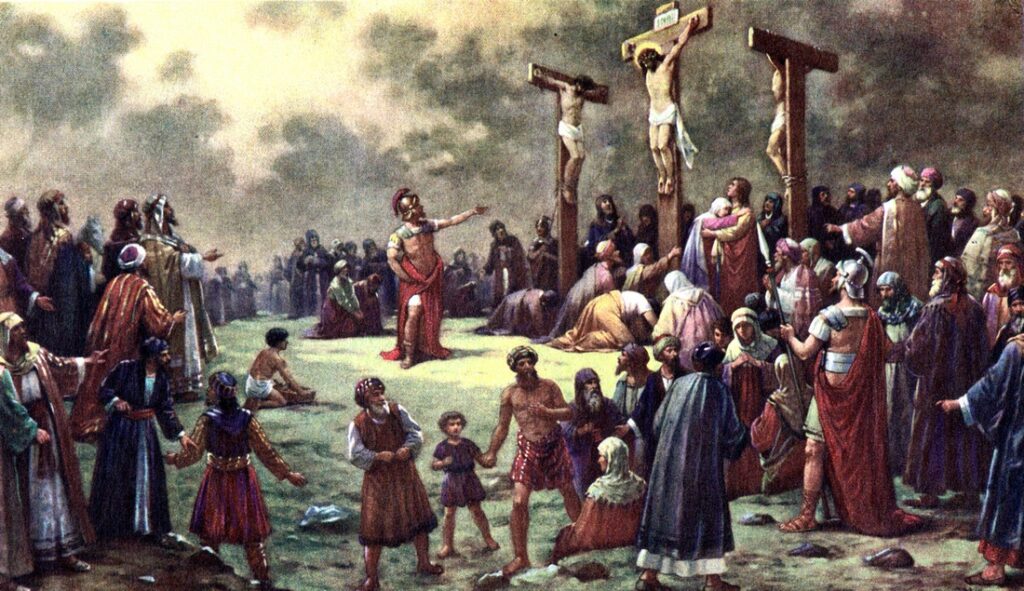 Jesus agonized on the cross for six hours. During his last three hours on the cross, from noon to 3 pm, darkness fell over the whole land. Jesus spoke from the cross, quoting the messianic Psalm 22: “My God, my God, why have you forsaken me?” 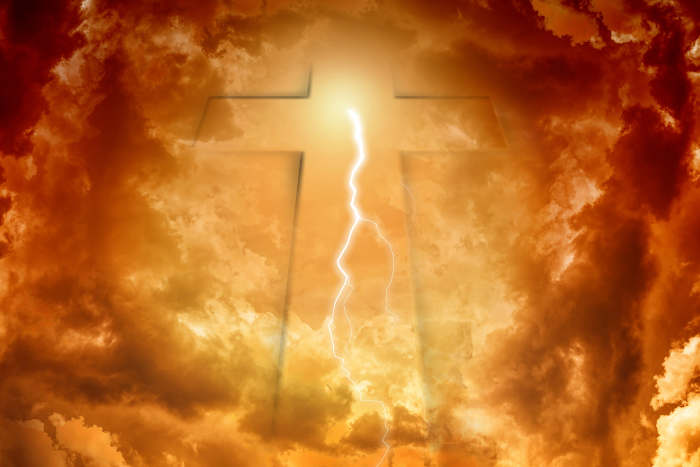 With a loud cry, Jesus gave up his spirit. There was an earthquake, tombs broke open, and the curtain in the Temple was torn from top to bottom. The centurion on guard at the site of crucifixion declared, “Truly this was God’s Son!” 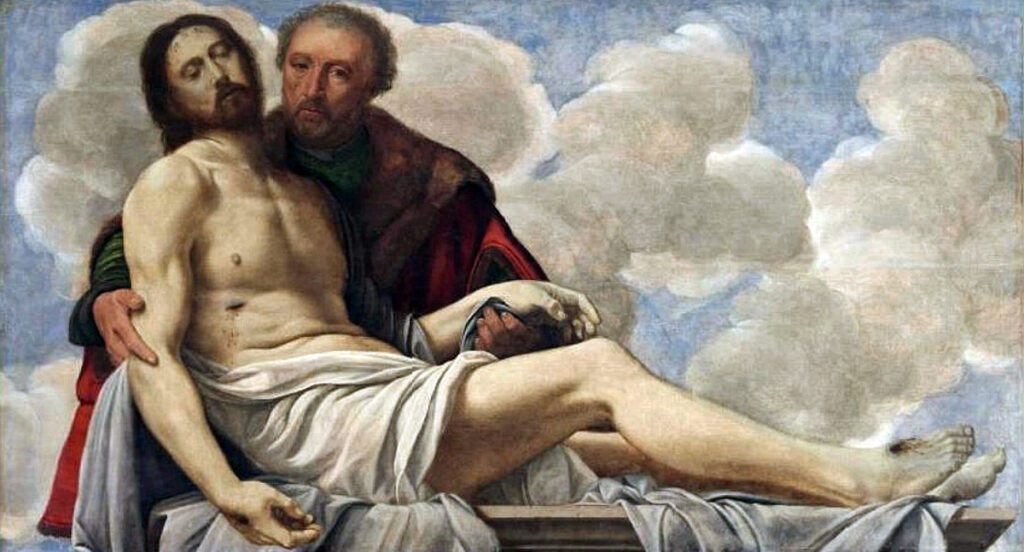 Joseph of Arimathea, a member of the Sanhedrin and a secret follower of Jesus, who had not consented to his condemnation, went to Pilate to request the body of Jesus Another secret follower of Jesus and member of the Sanhedrin named Nicodemus brought about a hundred-pound weight mixture of spices and helped wrap the body of Jesus. Pilate asked confirmation from the centurion of whether Jesus was dead. A soldier pierced the side of Jesus with a lance causing blood and water to flow out and the centurion informed Pilate that Jesus was dead. 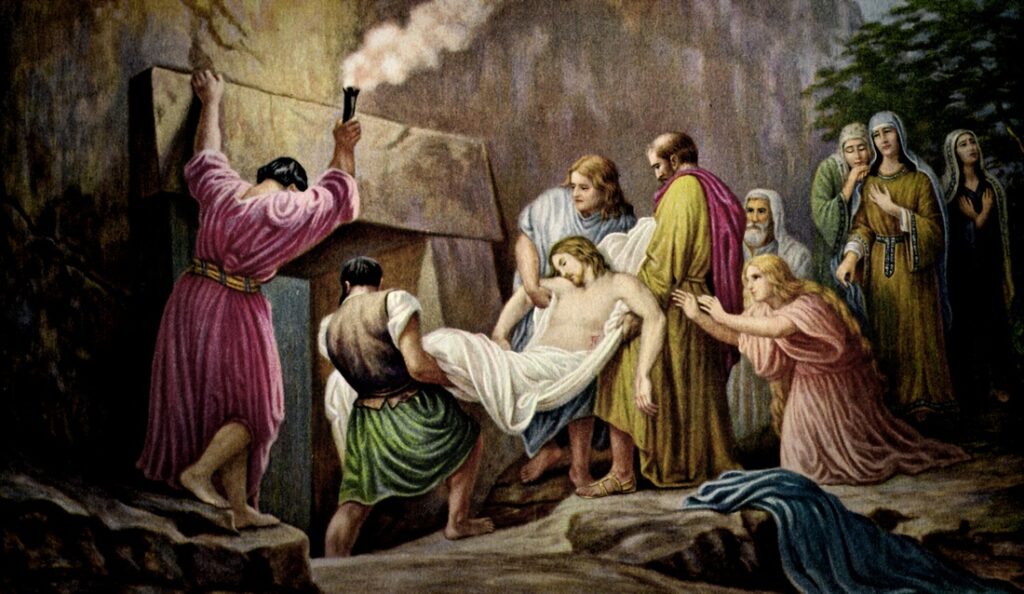 Joseph of Arimathea took Jesus’ body, wrapped it in a clean linen shroud, and placed it in his own new tomb that had been carved in the rock in a garden near the site of the crucifixion. Nicodemus also brought 75 pounds of myrrh and aloes, and placed them in the linen with the body, in keeping with Jewish burial customs. They rolled a large rock over the entrance of the tomb. Then they returned home and rested, because Shabbat had begun at sunset.